The presentations this week deal, I think, with two discrete questions: first, as is apparent from the title, the proliferation of images to the point of saturation and, secondly, how the creators or purveyors of those images use them to impose a particular world view, an egregious example being the National Geographic magazine. This has led me to reflect on my own practice as a landscape and travel photographer and the extent to which I am guilty of falling into the same trap of capturing formulaic images and, in so doing, portraying a reality which conceals underlying and uncomfortable truths. The images we take away from trips to the less developed countries of, for example, sub-Saharan Africa tend to reflect the splendour of the landscape or the richness of the fauna rather than the realities of the everyday life of the inhabitants. We tend to encounter the latter only as educated tour guides or as performers in folkloric festivals. It is of course the case that, outside those contexts, local people may be deeply uncomfortable at having their photographs taken, or – a classic example of power negotiation – consenting to being photographed in exchange for payment. The image below from Tirana (Albania) of a man praying in a mosque is one example where, in  search for “local colour”,  I am conscious of having crassly and unwisely intruded on private moment of contemplation: 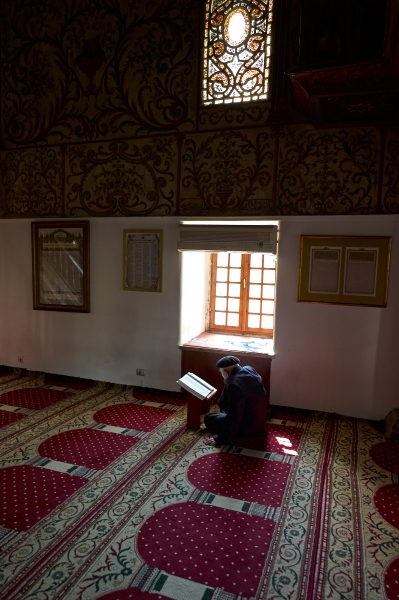 Landscape, too, tends to be seen by many photographers through the prism of Western conventions. Mitchell  (2002) writes instructively of the imposition of European aesthetics on the landscapes of the colonised lands and islands of the South Pacific , referring to Smith (1985) who noted “the way that specific places were quickly assimilated to the conventions of European landscape, with Tahiti represented as an Arcadian paradise in the style of Claude Lorrain and New Zealand as a romantic wilderness modelled on Salvator Rosa, complete with Maori “banditti”.

Closer to home, the stereotypical image finds further encouragement in initiatives such as that of Fáilte Ireland (the National Tourism Development Authority) in creating the Wild Atlantic Way  WildAtlanticWay.com stretching 2500km from Inishowen in Donegal to Kinsale in west Cork complete with 188 prominently marked “Discovery Points” – a veritable photographic theme park!

Smith, B., European vision and the South Pacific (Yale University, 1985)