As a landscape photographer, generally working alone, collaboration rarely enters into my practice. However, in the course of my project on Irish poets, I have been grateful to local people for directing me to appropriate sites, as well as for providing insights, anecdotes and general background, all of which have greatly assisted in the realisation of the project.

In Northern Ireland, I was able to enlist the help of Eugene Kielt, an expert on the work of Seamus Heaney and a friend of the late poet:

With Eugene’s assistance, I was able to gain access to Mossbawn, the farm where Heaney spent his early childhood. I must therefore also count the current residents of Mossbawn as collaborators in my project:

In the Republic of Ireland, I received assistance from the Yeats Society in Sligo and the Yeats Thoor Ballylee Society in County Galway.

This week’s presentations were of course more concerned with the extent to which human subjects collaborate with the photographer,  and the nature of that complicity. Since my landscapes are generally devoid of human presence, such questions rarely concern me.

However, some weeks ago, I found myself on a beach at Grand-Bassam,  the former colonial capital of the Ivory Coast. As I was on a work trip, my photographic equipment was limited to an iPhone and a small rangefinder camera. However, I captured a number of images,  some involving the voluntary participation of local people. In third-world countries, as elsewhere, the photographer should never assume that local people are willing accomplices in the image-making process. Occasionally, this involved a small payment, as in the case the “beach vendors” below:

In other cases, the subjects were more than happy to flaunt their talents: 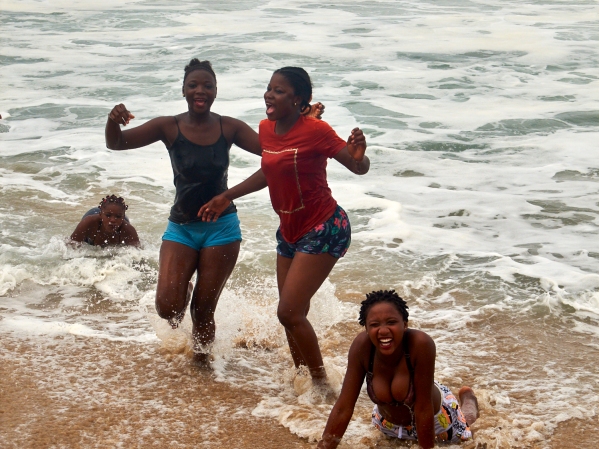 A Muslim gentleman  – one of a minority in a predominantly Christian country  – was pleased and proud to allow me to photograph his daughter, Aisha:

This week, I have visited the Museum of London which, with the backing of the British Journal of Photography, is currently hosting a major new exhibition, London Nights:

The nocturnal images of London range from the early days of photography to the present day. Many of the nocturnal images are familiar, such as Bill Brandt’s photographs documenting the London Blitz. I was particularly struck by Nick Turpin’s series Through a Glass Darkly,  https://nickturpin.com/winter-bus/,  images of Londoners – in this case, unwitting accomplices! – taken through the fogged-over windows of buses at the Elephant and Castle:

In the next post, I will be reporting on the Dorothea Lange/Vanessa Winship exhibition which has just opened at the Barbican Centre in London.